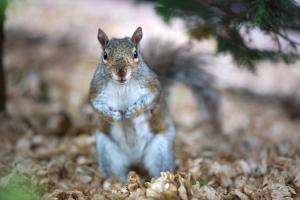 Do You Need Squirrel Removal Services In VA?

The Gray Squirrel (Sciurus carolinensis) often causes problems in Central Virginia when it decides to take up residence inside of your attic. Once in your Central Virginia attic they can be extremely destructive – tearing up and soiling insulation, gnawing on wires and structural materials, and generally making a lot of disruptive noises.

Virginia Professional Wildlife Removal Services performs many squirrel evictions every year in Central Virginia. We are not only knowledgeable in eviction techniques, but also in exclusion techniques to prevent your problem from recurring in your Central VA home or business.

Squirrels in Central Virginia are diurnal, meaning they are active twice a day, generally in the morning and evening. They mate two to three times a year and have litters of 3-5 young per litter.

The Southern Flying Squirrel (Glaucomys volans) can also be a problem in the attics of Central VA homeowners for many of the same reasons as the Gray Squirrel.

Squirrels in Central Virginia may eat cones and nip twigs to the extent that they interfere with natural reseeding of important forest trees. This is a particular problem in Ponderosa pine forests where pine squirrels may remove 60% to 80% of the cones in poor to fair seed years. In forest seed orchards, such squirrel damage interferes with commercial seed production.

In Central VA residential areas, squirrels sometimes travel powerlines and short out transformers. They gnaw on wires, enter buildings, and build nests in attics. Squirrels in Central Virginia may damage siding, insulation, or household contents when they take up residence in homes or other buildings. They frequently chew holes through pipelines used in maple syrup production.

Squirrels in Central Virginia occasionally damage lawns by burying or searching for and digging up nuts. They will chew bark and clip twigs on ornamental trees or shrubbery planted in yards. Often squirrels take food at feeders intended for birds. Sometimes they chew to enlarge openings of bird houses and then enter to eat nestling songbirds. Flying squirrels in Central Virginia are small enough to enter most bird houses and are especially likely to eat nesting birds.

In gardens, squirrels may eat planted seeds, mature fruits, or grains such as corn. (Source: Prevention and Control of Wildlife Damage, 1994)

Gray squirrels in Central Virginia are also subject to a host of parasites and diseases. Botfly larvae can cause enormous cysts on a squirrel before the larva emerges to pupate and metamorphose into a fly. Mange can leave squirrels with patches of raw furless skin. Ticks, fleas, lice, and worms also afflict gray squirrels in Central Virginia. Another peculiar ailment that is found in gray squirrels is squirrel pox or fibromatosis. This disease is caused by a virus and results in multiple large skin tumors which may appear anywhere on the squirrel´s body. Normally, this disease will run its course and the tumors will disappear unless secondary skin infections occur. If the tumors occur around the eyes or mouth, the squirrel may be unable to see or feed and may succumb due to starvation. Squirrel droppings, like pretty much any wildlife dropping, are associated with Leptospirosis and Salmonella. (Source: www.newyorkwild.org) 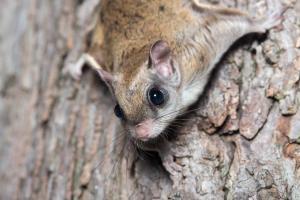 Slightly larger Northern Flying Squirrel is a richer brown, with abdominal fur usually gray at base. Breeding: Mates in early spring; 2-7 young born after gestation of 41 days. Often second litter August-September, usually by females not breeding in spring. Habitat: Various deciduous forests such as beech-maple, oak-hickory, and, in the South, live oak. Range: Eastern U.S. (except for north New England and southern tip of Florida) east of Minnesota, east Kansas, and east Texas.

Flying squirrels in Central Virginia are the only nocturnal tree squirrels. Although it is active in all seasons, the Southern Flying Squirrel may remain in its nest in very cold weather and will enter torpor in times of extreme cold or food scarcity. The state of torpor is not as deep as true hibernation, but the animal’s body temperature can drop to 22°F (-6°C), and it may take up to 40 minutes to wake. In Central Virginia, the flying squirrel does not truly fly, but glides through the air, up to 80 yards (meters) or more, from the top of one tree down to the trunk of another. It flies with its legs outstretched and the fold of skin between foreleg and hind leg acting as a combination parachute and sail (or glider wing). While gliding, it can turn or change its angle of descent. Just before landing, it drops its tail and lifts its forequarters, slackening the flight skin, which then serves as an air brake. It lands very lightly on all four feet, and at once scurries around to the other side of the tree trunk, in case a predator has followed its flight. Agile and extremely surefooted aloft, it is relatively clumsy on the ground. The most carnivorous of Central Virginia’s tree squirrels, the Southern Flying Squirrel feeds on nuts, acorns, seeds, berries, fungi, lichens, birds and their nestlings and eggs, some insects, and sometimes other vertebrates, including carrion. Hard parts and wings of larger insects are often discarded. Flying squirrels in Central Virginia will gnaw bark from maple trees and drink the sap, and also eat moths that come to the sap to feed. Great quantities of nuts, acorns, and seeds are stored for winter use, in tree hollows, in their nests, in crotches or cracks in trees, and in the ground. Hickory nuts and acorns may be buried throughout the home range, adding to the general store of nuts buried by other species of squirrels. Southern Flying Squirrels in Central Virginia may store up to 15,000 nuts in a season. They use their front incisors to pound the nuts into the ground or a crack in a tree. Woodpecker holes are favored nest sites, but the Southern Flying Squirrel in Central Virginia may build a summer nest of leaves, twigs, and bark that is similar to that of gray or fox squirrels, but is only about 8 inches (200 mm) in diameter. Typical dens are dead tree stubs 8 to 20 feet (2.5-6 m) high that contain woodpecker holes, 1 1/2 to 2 inches (40-50 mm) in diameter. The nest cavity is lined with shredded bark or, in the Deep South, Spanish moss and palmetto fibers. There is often a primary nest, plus many secondary nests used for temporary shelter. Some dens are used exclusively for defecation; over time, humus can build up to 1 1/2 feet (half a meter) deep. In winter, several individuals may den together in one tree hole, as their combined body heat brings up the den temperature; as many as 50 individuals have been found in one nest in winter. Flying squirrels in Central Virginia know their home range very well, and when abroad will hide in a hollow tree, under loose bark, or another convenient spot, such as an old bird or squirrel nest. The Southern Flying Squirrel mates in early spring. The female is receptive for just one day. She usually mates with the dominant male, and often a subordinate as well. At about four weeks of age the young resemble adults; at five weeks, they exit the nest to take solid food. Females of this species defend their young vigorously, and will move them to another nest if danger threatens. The main calls of adults are faint and bird-like notes, described as similar to those of night-migrating birds. The young produce squeaks, which include ultrasonic components. One researcher listened to ultrasonic sounds on a bat detector of a female and its young as the two became reunited after both hit a bat net (only the young became entangled). Southern Flying Squirrels in Central Virginia are more aggressive than its northern counterpart. Predators include owls and many mammals, but the house cat is the most dangerous. (Source: www.enature.com)

Flying squirrels in Central Virginia may cause damage when they enter buildings via construction gaps, dormer and louver vents, chimneys, fascia boards and soffits. Their entrance hole is often times the size of a quarter. Squirrels in Central Virginia have been responsible for starting fires by chewing on electrical wires. Other damages include accumulated droppings, urine stains, chewing and gnawing on wood, and degradation of insulation.

Outside their Central Virginia home they are known to denude bark on trees and shrubs, dig holes in turf, and raid bird feeders and gardens. There are few health concerns associated with flying squirrels. They are, on rare occasions, carriers of rabies and typhus, but these squirrels pose little, if any, significant threat to humans.

To successfully manage a flying squirrel population in Central Virginia, you must have an integrated wildlife pest management plan. Virginia Professional Wildlife Removal Services uses multiple approaches to eradicate and exclude these and other nuisance animals from your Central Virginia home, business and property.