Groundhogs causing you problems? Have groundhogs gotten under your porch, shed or garage? Are those pesky woodchucks eating your plants and destroying your garden? No problem, groundhog removal and woodchuck control is our specialty.

While Punxsutawney Phil may be fun to watch every February 2nd, he is not much fun when he takes up residence in your yard, under your residence, or under one of your buildings. Virginia Professional Wildlife Removal Services provides nuisance groundhog removal and exclusions in Central and Eastern Virginia – including Richmond, Charlottesville, Midlothian, Chesterfield, Glen Allen, Short Pump, Ashland, Goochland, Mineral, Gordonsville, Earlysville, Keswick, Louisa, Fluvanna, Orange, Albemarle, Amelia, Powhatan, Henrico and Hanover. Call us today and we will be happy to come out and help you with your unwelcome guests. While you’re waiting for us, you may want to learn a little about groundhogs and how they live.

The Groundhog, or Woodchuck, (Marmota Momax) is very prevalent throughout Virginia and is considered a nuisance species by the Virginia Department of Game and Inland Fisheries. They are diurnal animals, which means that they are most active in the morning and evening hours. They are usually a grizzled, brownish-gray, and weigh between 5 and 10 pounds and when startled will often emit a shrill whistle – which earned them the nickname “Whistlepig”. Most people are not aware that groundhogs are good climbers, and it is not unusual for them to climb trees.

Damage by groundhogs can range from mild to severe. They are often guilty of damaging vegetable and ornamental plants as well as shrubs and trees. Their diggings can undermine foundations, decks, driveways, swimming pools, and pond dams and dikes. They often chew on buried cables and wires and also building supports. Virginia Professional Wildlife Removal Services has handled several calls where a groundhog had been trapped inside a structure and had caused significant damage.

In late August and September, groundhogs have voracious appetites as they prepare to hibernate. This deep sleep, when body temperatures drop and heart rate slows to four beats per minute, usually begins in October and continues through February. They mate during March, shortly after emergence. In April four to five young are born. The young woodchucks remain in the den for about two months, leaving the nest in July to establish their own burrows and territories.

Removing a nuisance groundhog from your property does not have to be a sequel to the movie “Caddyshack”, call Virginia Professional Wildlife Removal Services today and let us handle the problem.

How To Get Rid Of Groundhogs – Marmot Prevention 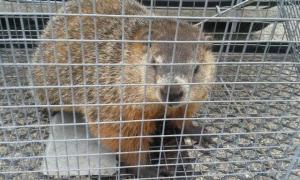 Groundhogs sometimes den in crawlspaces, so it is important to inspect the outside of the home for access points, such as broken vent covers or holes in the foundation. We have seen these critters completely destroy a homes HVAC system once they get into the crawlspace. Homeowners should seal all cracks and crevices with caulk, repair any loose siding and install a chimney cap over chimneys and other exposed openings. If an infestation is suspected, contact our licensed wildlife removal pest control professionals who can recommend the best method to get rid of a groundhog.

What Is The Difference Between Groundhogs, Woodchucks & Whistle Pigs?

There is no difference between a groundhog, woodchuck, whistle pig or marmot. In fact, the terms are interchangeable. This pesky critter is a member of the ground squirrel family.

Groundhogs are also known as woodchucks. On occasion, the woodchuck’s feeding and burrowing habits conflict with human interests. Damage often occurs on farms, in home gardens, orchards, nurseries, around buildings, and sometimes around dikes. Damage to crops such as alfalfa, soybeans, beans, squash, and peas can be costly and extensive. Fruit trees and ornamental shrubs are damaged by woodchucks as they gnaw or claw woody vegetation. Gnawing on underground power cables has caused electrical outages. Damage to rubber hoses in vehicles, such as those used for vacuum and fuel lines, has also been documented. Mounds of earth from the excavated burrow systems and holes formed at burrow entrances present a hazard to farm equipment, horses, and riders. On occasion, burrowing can weaken dikes and foundations. (Source: Prevention and Control of Wildlife Damage, 1994)

Groundhogs are considered a nuisance pest because they can cause extensive damage to home gardens, farms, orchards and field crops as a result of their feeding and burrowing habits. When burrowing, they have been known to destroy building foundations, create unwanted holes on lawns and cause electrical outages from gnawing on underground wires. Horses have also been known to break their leg when stepping in a groundhog hole.

The threat of contracting a disease from a woodchuck is very low. It has been documented that the woodchuck can carry several diseases, such as tularemia and sylvatic plague. Rodents are almost never found to be infected with the rabies virus. Woodchucks however are somewhat susceptible to the virus, and several have tested positive for the disease in Rhode Island. The most common way of human contraction of rabies is through pets or domesticated animals such as cats and dogs. Even though woodchucks pose little threat to humans one should always take precautions when dealing with wild animals. (Source: www.dem.ri.gov/programs/bnatres/fishwild/pdf/woodchuc.pdf)