We are a full-service animal wildlife trapping, removal and pest control company - Licensed and Insured! 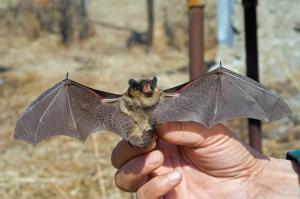 A bat in our hand is not in your home.

we are constantly striving to advance our education so that we may serve you better.

If you have a bat colony in your attic, call Virginia Professional Wildlife Removal Services today and schedule a site visit. We can safely remove the bats from your home, and make sure that the bats do not return. We do not perform bat exclusions from May through August.

The discovery of one or two bats in a house is a frequent problem in Virginia Beach. The big brown bats probably account for most sudden appearances. Common in urban areas, they often enter homes through open windows or unscreened fireplaces. If unused chimneys are selected for summer roosts, bats may fall or crawl through the open damper into the house. Sometimes bats may appear in a room, then disappear by crawling under a door to another room, hallway, or closet. They may also disappear behind curtains, wall hangings, bookcases, under beds, into waste baskets, and so forth. Locating and removing individual bats from living quarters can be laborious but is important. If all else fails, wait until dusk when the bat may appear once again as it attempts to find an exit. Since big brown bats may hibernate in the cooler recesses of heated buildings, they may suddenly appear (flying indoors or outdoors) in midwinter during a warm spell or a cold snap as they move about to adjust to the temperature shift. (Source: Prevention and Control of Wildlife Damage — 1994). Let our Virginia Beach bat removal professional safely get rid of bats in your home.

Infection occurs upon inhalation of spores and can result in a variety of clinical manifestations; severity partially depends on the quantity of spores inhaled. The infection may remain localized in the lungs where it may resolve uneventfully; this is the case for about 95% of the 500,000 infections occurring annually in the United States. Such infections are identified only by the presence of a positive histoplasmin skin test and/or calcified lesions on routine radiographs. Other individuals may have chronic or progressive lung disease requiring treatment. Less severe forms of these infections may be accompanied by fever, cough, and generalized symptoms similar to a prolonged influenza. Resolution of the disease confers a degree of immunity to reinfection. In addition, resolution confers varying degrees of hypersensitivity to H. capsulatum; as a consequence, massive reinfection in highly sensitized lungs may result in a fatal acute allergic reaction.

In a small percentage of chronic histoplasmosis cases, the fungus disseminates to involve multiple organ systems and may be fatal. This form is usually seen in young children (1 year or older) and in immunocompromised adults. In recent years, systemic infections have been increasing in frequency globally as an opportunistic infection of AIDS patients. (Source: Prevention and Control of Wildlife Damage — 1994)

You can count on our licensed and insured professional wildlife removal technicians to handle all of your Virginia Beach animal control needs. We are regularly rated the best bat removal and bat control experts by our customers. Our Virginia Beach bat removal staff have experience in the wildlife removal industry, and we will not stop until we resolve the animal control issue at your VA Beach home or business, guaranteed.